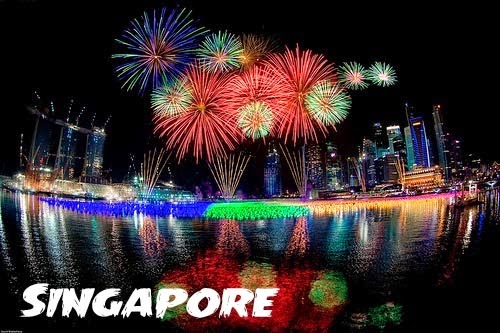 SINGAPORE: With thousands of revellers expected to ring in the New Year in town this coming weekend, event organisers and government agencies have increased security measures in light of recent overseas terror-related incidents over the festive period.

The recent attack on a Christmas market in Berlin and arrests of terrorists with explosives in Jakarta are reminders that terrorism is a “clear and present danger”, said Defence Minister Ng Eng Hen in a Facebook post before the Christmas weekend.

Organisers for Singapore’s largest countdown street party told Channel NewsAsia that on the back of recent terror-linked events, the safety of revellers is a “top priority”.

Celebrate 2017: Countdown with the Stars will take place at Suntec City’s Fountain of Wealth.

“We have stepped up our security measures and are working with the authorities as well as the venue owner on contingency plans. Bag checks are compulsory at all entry points,” said a spokesperson for Mediacorp’s Channel 5, which is organising the event.

Items like umbrellas, selfie sticks, skate scooters, tripods and water bottles will not be allowed for the safety of the participants.

Similar bag checks will be conducted at another large-scale event, the Marina Bay Countdown 2017, said the police in a news release.

Authorities also “strongly discouraged” the flying of unmanned aircraft, including drones in the vicinity of the New Year countdown parties.

The Land Transport Authority (LTA) said that security at public transport nodes has also been stepped up.

“Public transport operators’ staff and security will continue to remain vigilant and step up security measures such as checks and patrols,” LTA said in response to Channel NewsAsia’s queries.

“We also urge commuters to remain vigilant and report any suspicious activity that they come across during their public transport journeys.”

The police added members of the public too, play a critical role in ensuring Singapore’s safety and security, and that they should report suspicious people and activities to the Internal Security Department (1800-2626-473) or the police (999).

The Marina Bay countdown spans the bay as well as the civic district, and to prevent overcrowding, authorities will regulate the number of people entering the vicinity, said the police.

Additionally, pedestrians will not be allowed to congregate on the footways along the Esplanade Bridge and Bayfront Avenue along the Helix Bridge. The footway along Benjamin Sheares Bridge will be closed to pedestrians from 6.00pm on Dec 31 to 1.00am on Jan 1.

In the event of overcrowding, MRT trains may bypass the affected stations to alleviate congestion, authorities said.

To accommodate New Year revellers, SBS Transit will extend the operations of its train and some bus services on Saturday (Dec 31).

A number of lanes and roads in the civic district will also be closed: The police also warned drivers against stopping along the ECP expressway (Benjamin Sheares Bridge) to watch the fireworks, adding that it would take action against errant motorists.