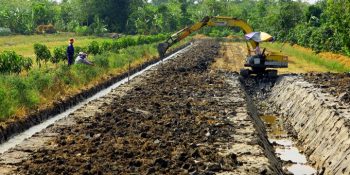 Viet Nam NewsCẦN THƠ — Scientists are compiling a crop structure map for the Mekong Delta to counter growing climate change impact in the region known as the country’s food granary.

The plan will determine which crops would be cultivated and on what scale based on annual weather and natural disaster predictions, said Nguyễn Hồng Sơn head of the Department of Cultivation under the Ministry of Agriculture and Rural Development.

Bùi Tân Yên, a scientist from the Research Programme on Climate Change, Agriculture, and Food Security (CCAFS), explained the vulnerability of the Mekong Delta region to adverse climate change impact, especially extreme drought, flooding, and salt intrusion. Yên said a wealth of research on natural disaster risks has not been “utilised well” to devise early warning systems and plans for coping with disaster.

Since there are varying natural characteristics, production practices and infrastructure development levels in the sub regions of the Mekong Delta, the master plan must be customised for each locality, he added.

Lương Quang Xô, Vice Rector of the Southern Institute of Water Resources Planning, said his institute is working with the Department of Cultivation to build a natural disaster risk map, based on which provinces can reschedule their cultivation schedules, minimising losses.

He proposed a number of measures, including switching to less water-intensive crops and saving water in the delta’s vast network of canals and in the fields to use in the dry season.

“Awareness campaigns must be done so farmers know that drought is upcoming. Complacency following some years with favourable weather might lead to significant consequences,” Xô stressed.

According to the Southern Institute of Water Resources, since 2010 salt intrusion in the Prof Lê Quang Trí has been starting 1-1.5 month earlier and lasting longer compared to previous years.

Prof Lê Quang Trí, head of the Climate Change Research Institute under the Cần Thơ University, identified six challenges for the region: climate change and rising sea level, the development of hydropower projects on the Mekong River, increasing population and migration, overexploitation of natural resources, change of land use, and air, water and land pollution.

Farmers in the region have to deal with many challenges and risks at the same time, and they need situation-based solutions that help them effectively adapt and improve their livelihoods, he stressed. — VNS