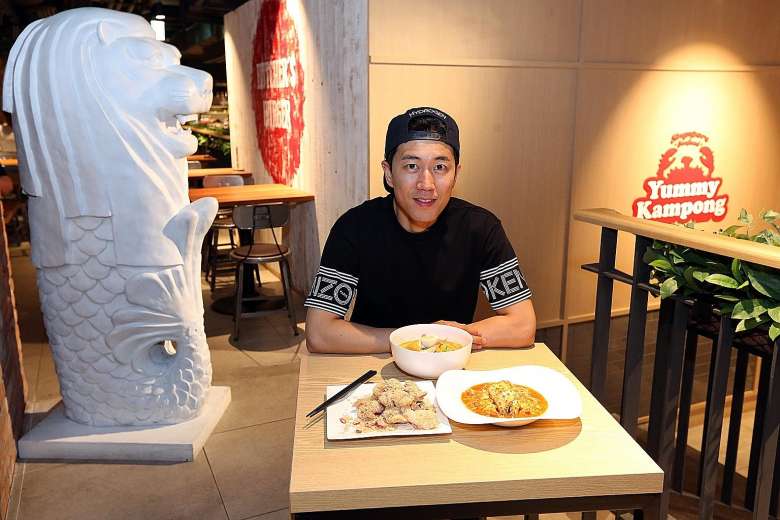 It was love at first bite for Korean actor-singer Jang Soo Won the moment he sank his teeth into the Singapore zi char favourite – cereal prawn.

Four years on, he has become such a big fan of Singapore food that he has opened two restaurants selling chilli crab, laksa, char kuay teow and other hawker delights.

“I just wanted to share the food that I love with other people around me,” he said.

The Singapore food he loves is actually a milder, Koreanised version found at Yummy Kampong, a Singapore-style seafood restaurant started in 2011 by Korean-Chinese chef Marcus Yu, whose wife is Singaporean.

Mr Jang took over the business in March, opening an outlet in Seoul and another in neighbouring city Songdo.

The laksa they serve would be bland by Singapore standards, but is just right for the Korean palate. It is a recipe that Yummy Kampong chefs took years to tweak to suit local tastebuds, according to Mr Yu.

Singapore may be known as a food paradise, but its food offerings have faced difficulty breaking into the Korean market where people are not known to be adventurous with food and would rather stick with staples like kimchi, bibimbap (mixed rice) and samgyeopsal (barbecued pork belly).

Koreans are not so much into flavour as they are into texture. They like their food chewy, which is why they can eat raw octopus, which is all about texture, and tteokbokki (spicy stir-fried rice cake) which is chewy but not flavourful, just a bit spicy.

MR JOHNATHAN QUEK, a Singaporean who runs his own hotplate and barbecue restaurant On The Grill in Seoul.

Latest figures from the Seoul city government show that there are 47,794 Korean restaurants in the capital, followed by 3,861 Chinese, 3,139 Western and 3,007 Japanese.

South-east Asian food – the most popular being Thai and Vietnamese cuisine – falls into the “others” category, which has a total of 701 restaurants.

Food industry experts said it was a constant struggle to strike a balance between being authentic and catering to Korean people, who tend to find original Singapore food too salty and oily, and not chewy enough.

Yummy Kampong’s Mr Yu, who moved to Singapore in the 1990s and owns two restaurants there, said he had to cut down on oil and spices to suit Koreans. “We had to keep changing the recipe to get the taste that Koreans like,” he said.

Singaporean Johnathan Quek, who has worked in the food business here in the past five years, said it is difficult to get Koreans to accept foreign flavours as they are used to eating food made from the same basic ingredients, such as doenjang (soyabean paste), gochujang (red pepper paste), anchovies and beef stock.

“Koreans are not so much into flavour as they are into texture,” said Mr Quek, who runs his own hotplate and barbecue restaurant On The Grill in Seoul.

“They like their food chewy, which is why they can eat raw octopus, which is all about texture, and tteokbokki (spicy stir-fried rice cake) which is chewy, but not flavourful, just a bit spicy.”

There are also small, independent cafes popping up in Seoul, including Merlion Cafe which sells Singapore drinks and desserts in the hip Hongdae area. It was started last April by Singaporean Ken Ng and a Korean cousin.

Besides catering to the Korean taste, another issue for these food establishments is that many key ingredients needed to bring out the Singapore flavour are not available here due to import restrictions. For instance, Customs law does not allow pandan leaf and laksa leaf to be imported.

At the 10-day Singapore Food Festival held at the Millennium Seoul Hilton hotel that ended yesterday, guest chefs from Singapore’s Orchard Hotel had to bring some of their own spices and improvise on recipes using ingredients available here.

Chef Koh Kwee Huat said the chicken rice would not be as fragrant due to the lack of pandan leaf, and the only lemongrass available here is frozen and tastes mild compared to fresh ones. He added that they made char kuay teow using a combination of Vietnamese dried kuay teow which is thinner, and Japanese yellow noodles, and improvised on laksa using Korean dried shrimp which is softer and less fragrant than Singapore’s hae bee.

“It is impossible to make authentic Singapore food here, unless you import all the ingredients. We can only try our best to create the closest taste for some signature dishes,” said Chef Koh, who has worked at Orchard Hotel for 25 years.

Over at Merlion Cafe, Mr Ng said they import coffee, tea, palm sugar and condensed milk from Singapore, but make their own kaya and desserts from scratch. About 50 per cent of their menu is Singapore food, including tang yuan (glutinous rice balls) and soya beancurd pudding. Desserts that did not score well, like green bean soup and chendol, were removed.

“As much as we want to be authentic, we need to Koreanise because doing a business is all about dollars and cents. If Singaporeans come, we can serve them kopi gao (which means thick coffee), but if Koreans come, we will give them light coffee which is what they like,” he said.

Things could change in the future with Koreans starting to travel more and becoming more exposed to food from all over the world. But for some, old habits die hard.

Medical records officer Cha Ji Myeong, 28, visited Singapore for a vacation in 2014, but liked only chilli crab and kaya toast. “Singapore is such a hot country, but there’s so much more fried food and they use so much coconut milk, which I find too greasy,” she said. “But if there are Singapore restaurants in Seoul that are suited to Korean taste, I’d still go have a try.”