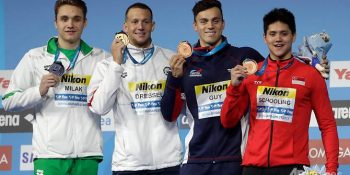 American Caeleb Dressel won the event with a timing of 49.86s, just 0.04s short of the world record set by Michael Phelps in 2009. Hungary’s Kristof Milak picked up the silver with a timing of 50.62s, while James Guy from the UK tied with Schooling at third place.

“It was an unbelievably fast race, Caeleb was amazing, the Hungarian kid came from nowhere with an incredible time,” said Schooling. “The next three or four years are going to be really interesting between the four of us.”

At the semi-finals on Saturday, Schooling clocked 50.78s at the Duna Arena in Budapest, Hungary to finish 4th overall. He also came in 4th in the heats on Friday, clocking 51.21s.

The 100m butterfly was Schooling’s final shot at gold at the championships after he finished fifth in the 50m butterfly final and failed to make the semi-finals of the 100m freestyle.

The 22-year-old was a favourite to win the event after he clinched Singapore’s historic gold medal during the 2016 Rio Olympic Games.