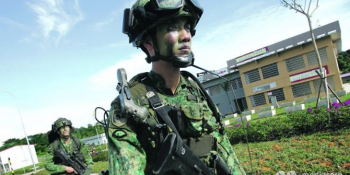 SINGAPORE: To commemorate the 50th anniversary of National Service (NS) in Singapore, a slew of events and activities have been planned for NS50 week from Aug 1 to 10 and these include the release of a music album and the launch of concept trains for the occasion.

According to the Ministry of Defence (MINDEF), August is of historical significance as it marks the enlistment of the first batch of full-time national servicemen in 1967. The pioneer batch of enlistees reported on Aug 17 that year to the 3rd and 4th Singapore Infantry Regiments (SIR) at Taman Jurong Camp, it said.

As such, NS50 week is a “time for the nation to show their support for NS through organising or participating in events and activities”, the ministry said.

One such activity is the launch of the music album We’ll Carry On by the Music and Drama Company (MDC). The album features a total of seven tracks sung in English, Mandarin, Malay and Tamil by local celebrities who used to be from MDC, including Jack Neo, Nathan Hartono, Sezairi Sezali and Shabir.

MINDEF said the title track We’ll Carry On was released on Jun 30 to coincide with SAF Day on Jul 1, but the remaining tracks will be released on Aug 4 across multiple online music sharing platforms such as Soundcloud, Apple Music and Spotify, in partnership with Warner Music Singapore and the Composers and Authors Society of Singapore.

One concept train will carry NS50 messages and visuals to symbolise how NSmen serve across all uniformed services, and the Army and NS50-branded carriages will contain images with a “trick-eye” concept depicting the low rope, high kneel and salute. These are for people to take and share the photos with the hashtag #NS50, it said.

Both trains will be launched on Jul 31, and the designs will alternate between the East-West and North-South lines, MINDEF said.

On Aug 6, there will also be a commemoration event at the Taman Jurong National Day Observance Ceremony. Deputy Prime Minister Tharman Shanmugaratnam will be unveiling a NS50 Heritage Marker during the event, which will be held at the former grounds of the old Taman Jurong camp, which housed the pioneer batch of NSmen in 3rd and 4th SIR, the ministry said.

The NS50 week will also feature other notable events such as: