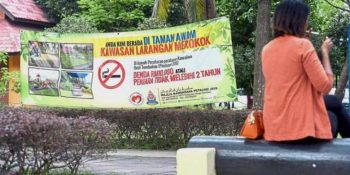 SHAH ALAM (THE STAR/ASIA NEWS NETWORK) – Those caught smoking in parks in Selangor will be hauled up under the Control of Tobacco Product (Amendment) Regulations 2017 beginning today.

They will face a maximum fine of RM10,000 (S$3233) or up to two years’ imprisonment. The ban also includes e-cigarettes.

Selangor Health director Datuk Dr Zailan Adnan said that enforcement, although starting today, will be carried out in stages.

“To gazette a park as a non-smoking area is a separate process, we need to know how big the park is and where the boundaries are.

“We also need to start soft enforcement, to educate and inform the public,” said Dr Zailan.

The ban is in line with Malaysia’s aim to be a smoke-free nation by 2045. In Perak, those who light up at public and state parks face a RM5,000 fine.

Perak Health Committee chairman Datuk Dr Mah Hang Soon said the ban on smoking in these newly-gazetted areas will be enforced as announced.

He said spot checks would be conducted from time to time at all 50 public and state parks here as the element of surprise was key in deterring smokers from puffing away with no regard for the new law.

“The three-month awareness programme held prior to the ban received positive feedback from the public, and our health authorities are ready to protect the public from the dangers of second-hand smoke,” he said after attending a Dumpling Festival celebration here yesterday.

“Through the programme, we learned that the public is supportive of the ban and we hope to enforce it effectively with surprise checks.”

Dr Mah said the main aim of the ban and enforcement was not to punish smokers, but to make them pay close attention to the dangers of smoking and second-hand smoke, and ultimately, to quit.

The authorities would continue to engage with the public to ensure that the ban is effectively implemented.

“If everything goes smoothly, we may seek to extend it beyond public and state parks and existing no-smoking areas,” he said.

It was reported that the Control of Tobacco Product (Amendment) Regulations 2017 had been amended, gazetting public parks and other open areas as no-smoking zones.

The only exceptions to the new ruling are open car parks.