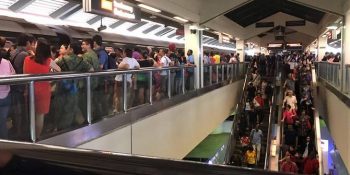 SINGAPORE: Signalling checks on the North-South Line must be carried out all day during weekdays to ensure that any teething issues with the new signalling system are sorted out, said transport operator SMRT on Tuesday (Jun 6).

“As there are limited engineering hours each day (from 1.30am to 4.30am), it is not possible for us to accumulate adequate testing hours if we do not run the new signalling system during weekdays,” it explained in a blog post, adding that the June school holidays are the “best opportunity” for its engineers to perform these checks.

Signalling checks had caused rush-hour delays on the North-South Line on two consecutive days last week, prompting some commuters to question why SMRT had to conduct the checks during peak hours and on weekdays.

On Tuesday, SMRT said that unlike new MRT lines where intensive testing can be conducted with a single type of train before passenger service starts, this is not possible on an existing line with various fleets of train. The North-South Line is Singapore’s oldest MRT line.

“We have to conduct all-day performance checks to work out teething issues that may rise when a new signalling system is introduced to a train network,” said SMRT.

“The system-level performance checks on weekdays will allow us to further intensify tests of the new signalling system’s reliability.”

The transport operator had warned commuters last week that there could potentially be more delays, as signalling testscontinue.