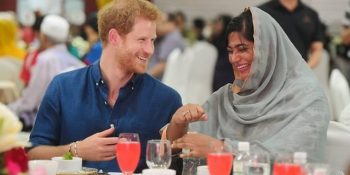 SINGAPORE: With just half an hour to spare, 32-year-old Nazhath Faheema was told that she would be sitting beside Britain’s Prince Harry when he broke fast with young Muslims at a much-anticipated iftar meal in Singapore.

“I was confused how to behave and how to act. I even started rehearsing what to say,” said the council member of Singapore’s Muslim Youth Ambassador of Peace (MYAP).

“I kept reminding myself to call him by his formal title ‘Your Royal Highness’. But once we broke the ice, it felt like talking to a friend,” she said.

The graduate student at Nanyang Technological University was photographed sharing a joke with the prince, also 32, in pictures that were widely picked up by international media.

Ms Nazhath told Channel NewsAsia that she had been telling Prince Harry that she generally broke her Ramadan fast with healthy food, but would indulge in junk food after finishing her traditional meal of dates and porridge.

Prince Harry asked her about the significance of breaking fast with dates, and she told him that this was something Muslims practised generally.

“I explained how Prophet Muhammad did this, and how we Muslims followed in his footsteps. There is a health benefit to breaking fast with dates and porridge and he was fascinated to know about that,” said Ms Nazhath, who reminded him to remove the seeds in the dates as they tucked into the fruit and porridge that were served at sunset.

REMEMBERING THE VICTIMS OF THE LONDON ATTACKS

During a Quranic recitation before they broke fast at Jamiyah Singapore, Prince Harry and about 80 young Muslims bowed their heads in remembrance of those who were killed in the London attacks on Saturday.

Seven people were killed and scores more injured in the attack, which the Islamic State militant group claimed responsibility for.

“(Prince Harry) appreciated the solidarity in condemning the acts by these individuals, who do not represent any religion or community,” said Ms Nazhath who, as a member of the MYAP, aims to spread awareness of radicalisation in Southeast Asia.

“We had a purposeful conversation about our efforts in Singapore and he was pleased to note that we have made good strides,” she added.

“WE EVEN FORGOT HE WAS ROYAL”

Prince Harry also had praise for the performers of a sychronised silat demonstration just before the iftar session, when he found out how they endured physical training even while fasting, Ms Nazhath said.

“He talked to the performers and was pleasantly surprised that they put themselves through rigorous training without consuming food or water for the entire day,” she said.

“And that was thing that struck me about him – he was royalty, but he spared a lot of time and effort talking to people. Be it silat performers, activists or just everyday people, he wanted to speak to all of us if he could.”

Initially worried about being a good host to the British prince, she said she was pleasantly surprised that it was he who made her feel welcome.

“He was so casual, cool and dapper – we even forgot that he was royal,” Ms Nazhath said.
Read more at http://www.channelnewsasia.com/news/singapore/breaking-fast-with-prince-harry-we-even-forgot-he-was-royal-8913928