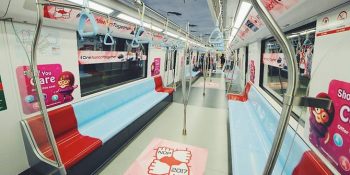 The trains will run on the North South-East West lines, the North-East Line, the Circle Line and the Downtown Line until Aug 27, said the Land Transport Authority (LTA).

Photos posted on Facebook by LTA showed the interior of a themed train decorated with logos highlighting this year’s NDP theme One Nation Together. There are also images on the ceiling of fighter jets as well as fireworks on the walls.

The trains are a collaboration between LTA, SBS Transit and SMRT.

“The themed trains are part of LTA’s efforts to celebrate National Day with the community while transforming our public transport for commuters to enjoy,” LTA said on Facebook.

This year’s parade will pay tribute to national servicemen as Singapore celebrates 50 years of National Service. It will feature the largest military tattoo performance in NDP history, a display of 300 unmanned drones and the signature bomb burst manoeuvre at the NDP aerial fly-past.