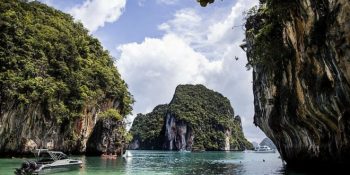 The incident took place on Monday in the southern province of Krabi, which is popular with tourists.

Police said the gunmen, who wore military-style clothing, had demanded to search the house.

The attackers held those in the home, including the chief, captive for several hours before shooting them and fleeing in a car.

Three people were also seriously injured in the attack, which police believe stemmed from a personal dispute.

An official told the Khao Sot news website that the chief had “many disputes” in the area.

The gunmen reportedly gained entry to the house by posing as officials who wanted to check on illegal activity.

Krabi province draws crowds every year who visit its beaches and cliffs. But AFP news agency said the incident did not take place in the province’s main tourist areas.

Many in Thailand own guns, and the country has a high gun-related homicide rate, but mass organised shootings are considered rare.