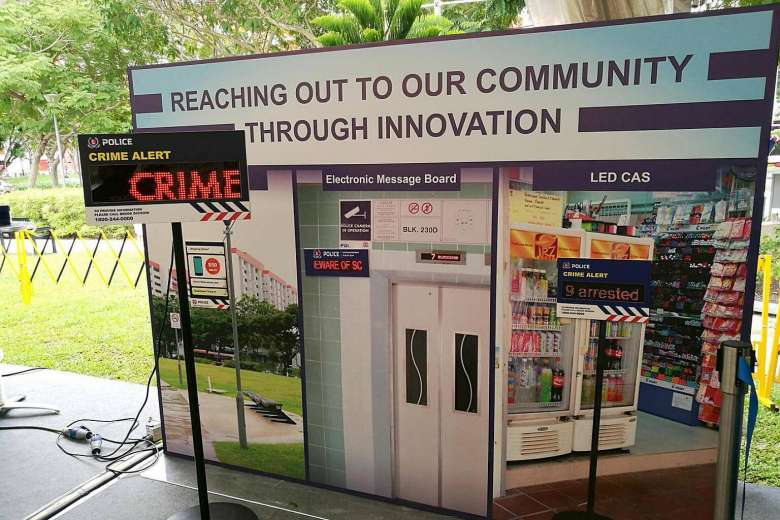 Singaporeans are already familiar with crime alerts on posters, but more of these warnings will be popping up electronically in the heartland.

Speaking to reporters at the roadshow, Commander of Bedok Police Division, Assistant Commissioner of Police Tan Tin Wee, said: “The Singapore Police Force is always looking out for new ways to reach out to the community.

“The new initiatives we launched today… will help us to remind the public to keep up their vigilance against both terror and crime, especially during this festive season.”

The LED alert signs, which display messages to raise crime awareness and deter shop theft, have been set up at eight locations in Bedok North since September

They can display messages in various languages, and the content can be instantly changed through a secure Wi-Fi connection.

Mr Raymond Tan, 53, who owns MCP Fairmart, said the eye-catching sign outside his Bedok outlet has solved a shoplifting problem he has had since April.

“There were a few groups of young people who would always come to my shop when it was crowded and steal things,” he said. “But since the LED sign went up in front of my shop, they stopped coming.”

For the first time, more than 30 crime-alert posters have also gone up on lamp posts in Marine Parade since October. And by the end of this month, seven electronic boards will be deployed at lift lobbies in Tampines.

These portable and lightweight boards can be programmed to display up to eight messages in various languages. If feedback from these pilots is positive, the electronic signs and posters could find their way around the island.

MP for Tampines GRC Cheng Li Hui, who was guest of honour at the roadshow, said the new crime alerts complement SGSecure – the nationwide drive against terror.

She said: “I’m happy to see that the Singapore Police Force is constantly leveraging technology to reach out to our residents to combat crime fighting. LED screens like these will actually bring timely information to residents, especially in times of crisis… we are also working very hard on promoting SGSecure.

“So we hope that while the police take a step forward to leverage technology, our residents can also work together with them to combat crime, especially when they see suspicious objects or people.”

The two-day event in Tampines, which ends today, is the fourth of five Police Community Roadshows in the heartland to raise awareness of police work.

Those who attended were treated to, among other things, an anti-scam skit by Temasek Polytechnic students, police defence tactics displays and a meet and greet with the police K-9 unit.

Many parents took their children to take pictures with police vehicles, try on various uniforms and learn more about police weapons.

Part-time administrative assistant Neo Aidi, 32, was there with her sons, Miguel and Piaget Ong, aged four and three respectively.

She said: “We live in Kembangan but came here because Miguel likes police stuff. He tried on the riot-police uniform and played with the guns.”

Pasir Ris resident Muhammad Samir Mohd Ishak, 28, also took his two-year-old daughter, Sofia Ariana, to the roadshow. He said: “You know how people always tell kids, ‘If you’re naughty, I’ll take you to the police’? I think children should learn that they shouldn’t be afraid of police officers, and instead seek their help if needed.”

The last police roadshow this year will be held at Woodlands Civic Centre next weekend.