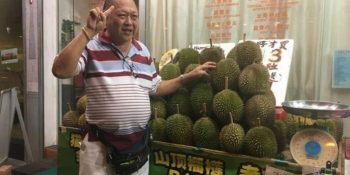 The annual event typically sees eager fans queuing up for free, high-quality durians from Mr Yap, who is affectionally known as Durian Seng.

Besides it being an opportunity to show appreciation for his longtime customers, this is also Mr Yap’s way of giving back to society and something he has consistently done for more than 30 years.

This year’s “durian party” began at 7.30pm and took place at 14 Jalan Tampang in Sembawang, where Mr Yap’s makeshift stall has been located for the past nine years.

Customers who flashed Durian Seng’s name card (or what he calls a loyalty card) were entitled to one box of free durians, which they had to consume at the venue.

Those without the card could receive one on the spot by purchasing a box of durians, and then immediately get another box for free.

Stomp was part of the crowd who visited Mr Yap at his stall to wish him a happy birthday.

Despite the extremely high prices and poor harvest of durians this year, Mr Yap said he decided to continue with his giveaway anyway, simply because he wanted to make his customers happy.

“Many of them are my longtime customers of over 10 years. They always show their support for me and do not buy durians from other places at all, so I try my best to give back to them,” he added.

Friends and customers of Mr Yap whom Stomp interviewed spoke just as highly and fondly of him.

Praising his honesty and generosity, several of them said that these were hard-to-find qualities and the reason behind their staunch support.

Besides giving Mr Yap red packets, a group had also prepared a cake for him and sang him a birthday song.

When Stomp asked about his birthday wish for 2017, Mr Yap responded with a grin, “To be healthy, for my customers to be happy and for everyone to live in bliss.”