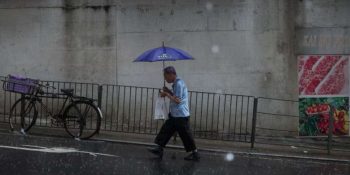 Financial markets, schools, businesses all resumed normal operations on Tuesday, a day after hundreds of thousands of workers scurried home early as authorities hoisted the No. 8 typhoon signal.

The No. 8 storm signal means that winds with mean speeds of 63kmh or above are expected, with gusts possibly topping 180kmh.

The Airport Authority said late on Monday that more than 41 flights had been cancelled and 275 were delayed.

Merbok made landfall on the eastern side of Mirs Bay before midnight and then headed across coastal Guangdong province.

Hong Kong lowered the storm signal to No. 3 early on Tuesday.