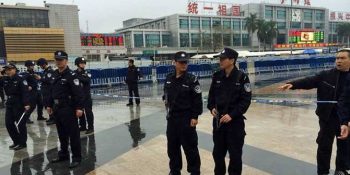 BEIJING: A knife attacker killed two people and injured 18 in a rampage in southwest China, state media reported, the latest such attack in recent years.

The man, aged 30 and believed to be suffering from mental health problems, is in police custody after the assault in Guizhou Province, according to the official Xinhua news agency.

All 20 victims were rushed to hospital after the attack, but two later died, said the report. Few other details were available.

Knife attacks are not uncommon in China.

In January a man armed with a kitchen knife stabbed 11 children at a kindergarten in China’s southern Guangxi Zhuang autonomous region.

In February last year, a knife-wielding assailant wounded 10 children in Haikou, in the southern island province of Hainan, before committing suicide.

In 2014 state media reported that a man stabbed three children and a teacher to death and wounded several others in a rampage at a primary school that refused to enrol his daughter.

That followed a March 2013 incident in which a man killed two relatives and then slashed 11 people, including six children, outside a school in China’s commercial hub Shanghai.

Violent crime has been on the rise in China in recent decades as the nation’s economy has boomed and the gap between rich and poor has expanded rapidly.