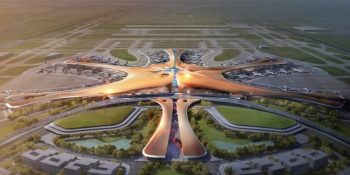 Beijing is booming, and it needs an airport capable of handling its growing population, along with the millions of tourists who visit annually. Luckily construction is already underway on the Beijing New Airport, and when it’s finished, it won’t just be a big airport, or a bigger airport; it will be the biggest airport in the world.

The first phase of the new airport, which is currently under construction in a rural area of southern Daxing district about 30 miles from Beijing’s city center, is set to open in 2019.

According to Travel & Leisure, the Beijing New Airport terminal building was designed by the late architect Zaha Hadid, and the style “evokes the harmony and balance evidence in Chinese landscapes, while its colors and materials are an expression of visual language within traditional Chinese culture.” With separate areas for domestic and international flights, the terminal’s designers hope to keep it easy to navigate despite is massive size: 700,000 square meters, to be exact.

The new airport will break size records, but Jia Zhiguo, an assistant general manager on the construction project, told Reuters there’s still concern that it won’t be big enough to keep up with Beijing’s travel needs. “Our worry isn’t whether or not we’ll have this many passengers,” Zhiguo said, “but whether we’ll be able to satisfy demand.”

So, how much does it cost to build the biggest airport in the world these days? Eighty billion yuan, which works out to about $12 billion. Because the new airport is so far from the city center, a high-speed train is also being constructed to transport passengers to and from the new travel hub.

Shockingly, even when Beijing New Airport reaches its full potential of 100 million travelers, it will still be only the second busiest airport in terms of number of passengers per year. Thewinner in that category for the past two decades has been none other than Atlanta’s Hartsfield-Jackson International Airport, which serves 104 million air travelers every single year.