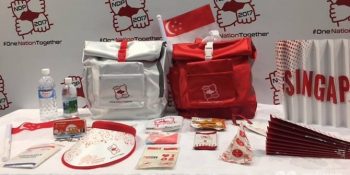 One of the items in the pack is a clap banner which is also a fan. When smacked against a palm, it produces a clapping sound; it can be spread out, too, to use as a banner.

The move to reduce the number of items was intentional, said Major Ang Kian Hoe Kelly, who is deputy chairman for logistics and finance. His team had noticed over the past years that there were more spectators taking photos and videos of the show while grappling with multiple interactive items.

“When combining items, we also free up their hands, so they can take selfies and engage in the show better,” said Major Ang.

Also in the funpack is an LED flag and an NS50 keychain to commemorate 50 years of National Service. There are five variations to represent each of the services within the Singapore Armed Forces and the two Home Team agencies. For instance, the army is represented by the Terrex and the SCDF is represented by the Red Rhino.

Spectators can also expect to find snacks inside the packs, such as salted egg chips and Khong Guan biscuits.

This year’s funpack comes in two colours – red and white – and will have a foldable top and detachable front pouches to allow spectators to switch things up.

The funpack design by Riche Tay, 22, and Denise Richter, 23, from LASALLE College of the Arts, bested more than 60 entries from their school, which is this year’s NDP funpack partner.

The duo, who took about a month to design the bags, said they took inspiration from current trends and aimed to make the bags as versatile as possible. They were also made to be easy to carry for spectators across different age groups.

“We wanted to make the bags more compact because NDP is very squeezy but the foldable top gives people extra space – so they can use the bag to run errands after NDP,” Mr Tay.

Ms Richter, who attended last week’s National Education show for Primary Five students, said it was very fulfilling to see a sea of children carry the packs they designed.

“I felt happy and honoured. It’s something we designed that is put to good use and I could see that they didn’t have any difficulties carrying it,” she said.

GET YOUR FUNPACK AT DISTRIBUTION POINTS

This year, those attending the parade – which will be held at the Marina Bay Floating Platform – will need to queue at certain distribution points to collect their funpacks, instead of having them placed at their seats before the parade. Organisers said this is in case of wet weather.

In last year’s parade, held at the National Stadium, organisers had done away with distribution points to shorten the time spectators took to get to their seats.

About 150,000 funpacks are being packed from now until August.