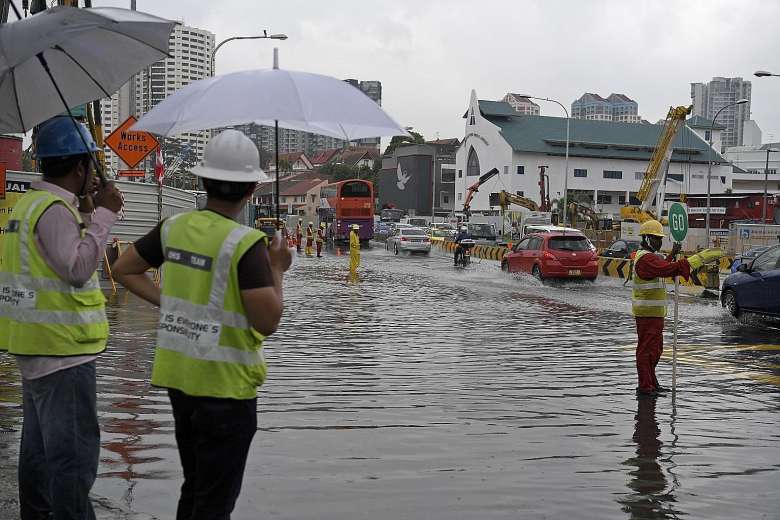 When it poured at around 3.30pm yesterday, the parking area in front of several shops along Upper Thomson Road was submerged in shin-deep waters.

Photos and videos posted on social media showed vehicles with up to half their tyres in water.

Drivers were impatient to leave the area affected by rising water, Mr Ricky Gabriel, who was at the UOB Bank, told The Straits Times.

But the handful of shops beside Thomson Plaza were fortunate they did not see a repeat of last year’s Christmas Eve flooding.

Flood waters had then risen to waist levels and threatened to enter Chicken House, a restaurant which faces a construction site. A waitress from Chicken House told ST that yesterday’s flood waters subsided about 30 minutes after it began raining heavily.

Ms Low Shu Cheng, 21, said: “It was not so bad this time because drivers could actually get into their cars. Only one Mercedes-Benz driver had problems when water entered his car as he opened the door.”

The National Environment Agency had earlier warned that moderate to heavy thundery showers were expected between 3.30pm and 4.30pm yesterday.

Despite some chaos, a supervisor of Tomoe Japanese Cuisine who wanted to be known only as Susan, was relieved that the situation did not deteriorate.

Ms Susan said: “Thankfully, the flood waters began receding after 30 minutes. It was also a stroke of luck that the heavy rain came when our restaurant was closed for the afternoon anyway.”

Across the road at The Roti Prata House, workers kept their eyes on the metal drain covers in front of the restaurant in case of blockage.

Mr Syed Ridzwan, 40, said: “When leaves and debris started to cover the drain covers, my colleague went to remove them.”

National water agency PUB said on Tuesday that it will be taking action against Land Transport Authority contractor Sato Kogyo after it discovered the firm had carried out unauthorised works that affected the public drainage system and caused the Christmas Eve flood in the Upper Thomson Road area. It has asked the firm to carry out rectifications to improve drainage in the area.

A joint LTA-PUB statement yesterday said LTA has asked the firm, which is involved in MRT works there, to expedite canal widening works along Upper Thomson Road and Jalan Keli to enhance the drainage system and improve overall flood resilience in the area. “Once the canal is complete in the third quarter of 2017, it will enhance flood protection for the area,” it added.