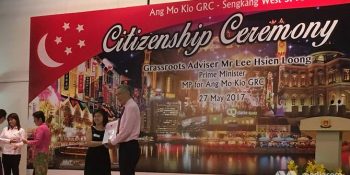 SINGAPORE: Singapore has to manage the population carefully, even as it grapples with its low fertility rate and the issue of having a stable population, Prime Minister Lee Hsien Loong said on Saturday (May 27).

Mr Lee said that with the country’s total fertility rate at about 1.3, Singaporeans are far from replacing themselves. About 30,000 babies are born as citizens every year and, to top up, about 20,000 foreigners become new citizens annually.

With about 50,000 new citizens every year, Singapore can “almost sustain a stable population”, he added.

Mr Lee said: “We have to manage the inflow carefully, and make sure that the people who come can integrate into our society, make sure they have the abilities and skills to contribute to our economy, and make sure their hearts are in the right place and they will become good Singaporeans. We are a country, not simply a city or an economy.”

The prime minister was speaking at the citizenship ceremony on Saturday, which saw 150 residents from Ang Mo Kio GRC and Sengkang West SMC officially became Singaporeans and presented with their citizenship certificates.

He also congratulated the new citizens and urged them to continue to deepen their roots here.