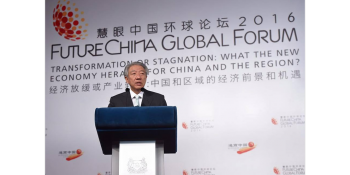 SINGAPORE: Singapore and China have built a strong bilateral relationship that has adapted with the changing needs of both countries over the years, said Deputy Prime Minister Teo Chee Hean on Thursday (Jul 13) at the FutureChina Global Forum, where he reiterated Singapore’s support for China’s Belt and Road Initiative.

He noted that Prime Minister Lee Hsien Loong and Chinese President Xi Jinping, who were both in Germany for the G20 Leaders’ Summit, met and affirmed both countries’ substantive relationship, frequent high-level exchanges, and good progress in bilateral cooperation.

“The Belt and Road initiative … has much potential for broadening and deepening our relationship and taking it to the next level.

“Indeed, there are many important partnerships and initiatives that Singapore and China are working on. In the coming year, both countries will be working together on an upgrade of the China-Singapore free trade agreement,” Mr Teo said.

Singapore will be taking on the chairmanship of the Association of Southeast Asian Nations (ASEAN) in 2018. It will also be country coordinator for the ASEAN-China Dialogue Relations, and Mr Teo said Singapore hopes to work with China and partner countries to expedite the conclusion of the Regional Comprehensive Economic Partnership.

Mr Teo noted that he had discussed with Chinese Vice Premier Zhang Gaoli in February three priority Belt and Road areas that both countries could work on together.

These are enhancing physical and digital, financial and people-to-people connectivity.

Mr Teo noted that large investments are being made to build new transportation links, and the full potential of the investments can be realised when they form a network allowing the safe and free flow of goods.

He said this covers maritime routes through the South China Sea, Straits of Malacca and Singapore, and the Indian Ocean.

SINGAPORE’S POSITION ON STRAITS OF MALACCA AND SINGAPORE

On the issue of navigation through waterways to facilitate connectivity, Mr Teo said Singapore will continue to uphold the right of transit passage for ships and aircraft of all countries through the Straits of Malacca and Singapore.

“The Straits of Malacca and Singapore have the status of Straits Used for International Navigation. Passage through these Straits is covered under the regime of transit passage, specifically provided for in international law.

“Transit passage cannot be suspended or impeded. Singapore is a strong proponent of the right of transit passage for ships and aircraft of all countries through the Straits of Malacca and Singapore. This is a key principle of vital interest to us as trade is our lifeblood,” Mr Teo said.

He said adherence to the right of transit is critical for the success of the modern Maritime Silk Route, since it ensures the smooth and unhindered flow of trade and traffic through the Straits.

“In 2006, Singapore disagreed with Australia’s proposal to place certain restrictions on vessels transiting the Torres Straits between Papua New Guinea and Australia, even though Singapore is also a strong advocate of marine environmental protection. China too had expressed her disagreement with this Australian proposal,” he noted.

He said working together to keep sea lanes open and safe for shipping for all countries is a key pre-requisite for the modern Maritime Silk Road.

Mr Teo said there is also potential “to leverage on data and digital technology to connect people, and enhance the flow of goods, services and data among cities along the Belt and Road”. Doing so will create a network that enhances the benefits in both physical and virtual space.

He cited as an example of this the third Singapore-China government-to-government project, the China-Singapore (Chongqing) Demonstration Initiative on Strategic Connectivity launched two years ago.

It is a key priority demonstration project under China’s Belt and Road, Western Region Development and Yangtze River Economic Belt Strategies, he said.

Other linkages that can be tapped on include the potential for institutional investors to complement traditional bank financing to match the financing needs of projects, and using Singapore and China’s bilateral expertise and experience to collaborate with third countries for manpower development.

“This could include programmes to share experiences in project preparation and finance, operating ports and airports, and managing industrial parks and free trade zones,” Mr Teo said.

“Mutual learning is in line with the Silk Road Spirit of ‘peace and cooperation, openness and inclusiveness, mutual learning and mutual benefit’,” he added.