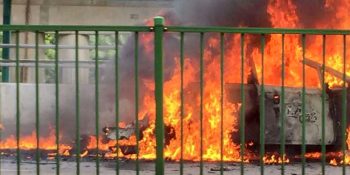 A fireman walks towards a burning Trans-Cab taxi, dousing it with a water jet. Just seconds later, the car explodes, engulfing the man in flames. This harrowing sight shocked onlookers in Commonwealth Avenue at around 2.30pm yesterday, when the taxi caught fire after a collision with a car.

Videos of the incident quickly made the rounds on social media. One clip shows the fireman running away from the blast.

Preliminary investigations by the Singapore Civil Defence Force (SCDF) and the police revealed that the road accident likely caused the explosion.

Four men were injured in the blast near Buona Vista MRT station. All had minor burns, including the SCDF officer, and were taken to the National University Hospital.

The Straits Times understands that the other three injured men were the taxi driver, a motorcyclist and a passer-by. Nobody was hurt in the accident itself.

Residents at Block 43, Holland Drive, just across from the accident site, told The Straits Times that they heard at least two explosions and felt the ground shake.

Madam Devi Raju, 54, rushed out of her home when she heard a “loud bang”. She saw the Trans-Cab taxi spewing grey smoke and its anxious driver gesturing for the cars lined up behind the vehicle to move backwards.

“It all seemed to have happened so quickly. The next thing I knew, the car was in flames,” said the administrator. “I felt the ground shake when the car exploded. It was very scary.”

Retired engineer Saviour Nathan, 61, said he saw two objects flying from the car. One fell a short distance behind it, and the other landed across the road and was believed to have hit a man on the arm.

A patch of blood was seen at the foot of a nearby overhead bridge when The Straits Times visited the scene.

“We were most concerned about the fireman who was trying to put out the fire when the car exploded, and whether he was badly injured,” said Mr Saviour.

Firefighters were using two water jets and a compressed air foam backpack to douse the flames.

Mr Kuek Jia Jun, a 25-year-old undergraduate, said he later spotted a man believed to be the cab driver with burns on his body. “He seemed to be in shock,” he said. “He kept telling the girl (speaking to him) that he felt very hot.”

Netizens took to Facebook to praise the injured SCDF officer for his bravery. In a Facebook post, the SCDF thanked them for their kind words and concern, adding that the officer had been discharged from hospital and is recuperating.

Law and Home Affairs Minister K. Shanmugam also wished the officer a speedy recovery, and said he sustained first-degree burns to his face and neck.

Yesterday’s incident caused traffic along Commonwealth Avenue to slow for at least four hours. The Straits Times’ checks found that traffic was back to normal by 8.30pm.

Investigations by the police, SCDF and Land Transport Authority are ongoing.

Taxi explodes while firefighters try to put out fire. http://str.sg/42MA