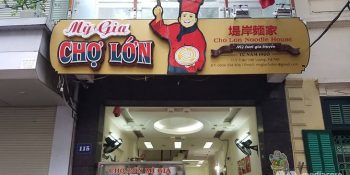 HANOI: For many first-time visitors to Hanoi, their food excursion in this fast-changing city usually includes pho (beef or chicken noodle) and bun cha (vermicelli and grilled chopped meat).

But as many local and long-time residents know, this 1,000-year-old-city has many other culinary delights to offer other than these two popular dishes.

Top of many lists when the hunger pangs hit is a wonton noodle soup stall – My Gia Cho Lon 1960 – on Trieu Viet Vuong street.

With a base in Ho Chi Minh City, the noodle stall first opened in Hanoi back in 2001. Duong Thanh Tung, 35, took over the food shop three years ago.

The most popular item here, however, is the wonton noodle soup which costs about 40,000 VND (US$1.76). The noodles are homemade but what really brings the customers back is the broth – a fresh, light and delicate soup with no MSG.

The stock is made from scratch using a secret family recipe that has been handed down for generations. When served with the springy noodle, crispy wanton and tender char siu, the flavour of the broth is enhanced and is certainly well worth the wait.

Tung says the recipe dates as far back as the 1920s and that the shop’s wanton noodle soup is a “combination of China’s Guangdong and Fujian noodle styles, adapted to Vietnamese local taste.”

According to food historian Erica Peters, Vietnam has had a significant Chinese trading community since at least the 17th century. As they fled China’s southern regions of Guangdong and Fujian after the Manchus overthrew the Ming dynasty, the Chinese brought with them their cuisine to Vietnam, including lao huo zhou (slow-cooked stew), tan mien (noodle soup), and wanton soup, which evolved into Vietnamese soups such as lau (hot pot) and hu tieu (noodle soup with pork, shrimp, and bean sprouts).

Tung is fifth-generation Vietnamese. His family came from Fujian, China and they sold Chinese traditional medicines in Central Vietnam to make a living. But the medicine trade was forced to shut down in the 1920s as trading routes to China, where they sourced their merchandise, was cut off. That marked the start of the noodle business.

What really sets Tung’s business apart from the rest, besides the secret recipe, is his sunny disposition. Tung greets every customer with a smile, sharing with them how best to enjoy his noodles.

“You might want to mix the noodle up to get the best taste, because the main sauce is at the bottom of the bowl,” he said with a smile. “It goes well with soy sauce too,” he added, before calling out to a busboy to get a new serving of soy sauce.

As another group of customers arrived, he went out to the door and greeted them by name.

“Most of our customers are regulars and I know many of them now,” he said. “Once a customer tries our food, there is a good chance he or she will come back.”