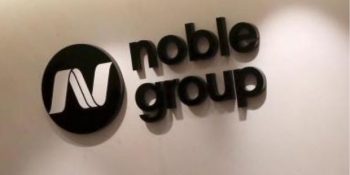 The Singapore-listed firm has suffered fresh setbacks this month, reporting a quarterly loss that pummelled its stocks and bonds.

Citing sources, Reuters reported on Monday that China’s state-owned Sinochem is no longer pursuing an investment in Noble due to concerns over its finances and business outlook.

This has deepened its struggles to repair investor confidence in the past two years after a questioning of its accounts by Iceberg Research and a commodities downturn that triggered a share price collapse, credit downgrades and a series of writedowns, asset sales and fund raising. Noble has stood by its accounts

“We downgraded Noble because we believe the company’s capital structure is not sustainable,” S&P said late on Monday, cutting Noble’s long-term corporate credit rating to CCC+ from B+. It added that the outlook is negative.

“We could lower our rating on Noble if the company’s liquidity position further deteriorates to the extent that we see an increased likelihood of failure to meet debt obligations due in the next 12 months,” it said.

Before the trading halt, which was requested less than an hour after the market open, Noble shares dropped as much as 32% to S$0.40, the lowest since 2001.

The slide in Noble shares began earlier this month after the firm reported a surprise quarterly loss of US$129.3 million for January-March. Noble’s market value has since shrunk to a low of about US$400 million from US$6 billion in February 2015.

The Sinochem move, the only large-scale name publicly linked to Noble in recent times, is a setback to the commodity trader.

It comes at a time when it is set to negotiate a crucial rollover of a US$2 billion credit facility secured on its inventories and working capital.

It has also kicked off a strategic review of its businesses under new chairman Paul Brough. – Reuters
Read more at http://www.thestar.com.my/business/business-news/2017/05/23/noble-shares-tumble-after-s-and-p-ratings-downgrade/#1JuOf2DFvirlzXRS.99