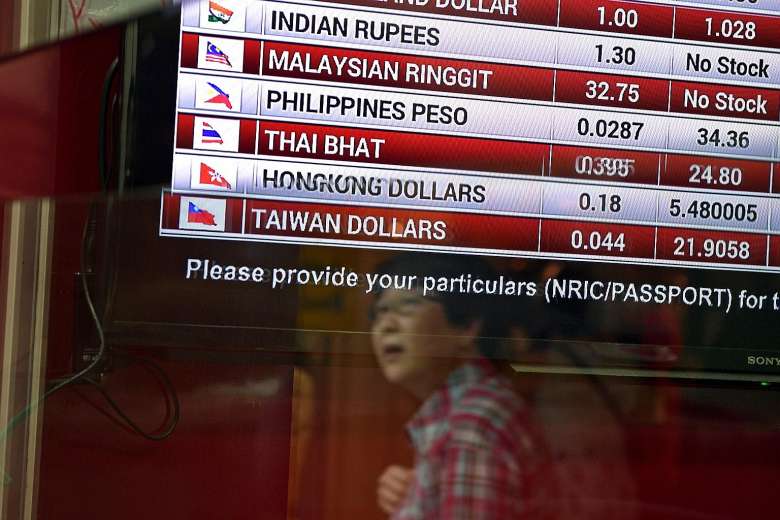 Rates down from last week, but demand still high for plunging Malaysian currency At least four money changers at Change Alley ran out of the Malaysian currency yesterday as people stocked up on the plunging ringgit.

One money changer, who wanted to be known only as Mr Bill, said he was cleaned out within a few hours of opening because he underestimated demand.

Even though the rates on offer yesterday were down on last week, there was still strong demand for the currency. Money changers were offering between 3.01 and 3.03 to one Singdollar – below the 3.05 up for grabs last week.

The volatile currency has been on a rollercoaster ride for months, buffeted first by the commodities downturn and now by fears that Malaysia will suffer badly if United States President-elect Donald Trump follows through on his anti- trade rhetoric once he assumes the top job in January.

Foreign exchange markets are already pricing in more falls. The ringgit was trading at about 3.05 to the Singdollar yesterday, almost at the low point of 3.06 reached in January

That rate of 3.05 to the Singdollar may filter down to money changers, which would likely spur even more buying by people here, especially those who frequently travel across the Causeway.

One customer, who wanted to be known only as Madam Saiedah, said she travels to Johor Baru twice a month for shopping. The 30-year-old administrator said her frequent visits prompted her to change “a small amount” yesterday, even though she did not think the rate was that good. Others at money changers said they were there to browse and holding off on buying.

Foreign exchange experts said that there is more volatility ahead for the Malaysian currency.

Mr Nizam Idris, head of forex strategy at Macquarie Bank, said he had earlier forecast that the ringgit could weaken further to hit 3.15 against the Singdollar in the first quarter of next year. He added that he now thinks the ringgit could hit that level earlier, given the political developments in the US.

Mr Heng Koon How, senior investment strategist at Credit Suisse, noted that many Asian currencies have weakened, but the pressure on the ringgit is more intense.

“This is contrary to the rest of Asia, where most central banks have had strong growth in their reserves. As such, the Malaysian authorities will be less able to mitigate any excessive weakness in the ringgit.”