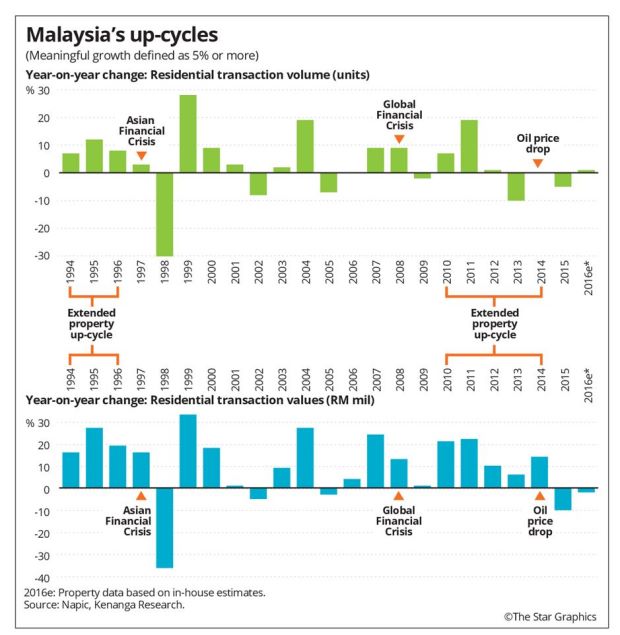 AT a recent property seminar organised by Asian Strategy & Leadership Institute, several developers and property consultants had a debate predicting when the property market will pick up.

Ng was the moderator for the session on The Future Outlook and Challenges of the Housing and Property Sector.

Ng says the current slow housing market is actually good over the long term, although it is painful in the short term. It all depends on how we manage “the noise”, he says.

There are lots of noises at present, both on the national and international level.

“If next year is election year, the recovery – if there is one – will be after that because between now and then, there are so many uncertainties.

“There is a lack of clarity at the moment,” says Ng.

His reading of the property crystal ball of a 2017/2018 turnaround is by far the most positive and contrasts with Kenanga Investment Bank Bhd equity research head Sarah Lim Fern Chieh.

Lim expects house prices to be flattish or slightly weak depending on locations “over the next four to five years, if there are no major policy changes”.

But after the 2008 Global Financial Crisis, Malaysia had an extended five-year up-cycle between 2010 and 2014 with prices peaking in 2013, and this was largely due to quantitative easing (QE).

She is, therefore, expecting a longer consolidation period of between four and five years, starting from 2015, before the next up-cycle, barring any policy changes and the global economic climate.

She is also expecting the property market to experience structural changes due to affordability and liquidity factors, among others.

Notwithstanding the fuzzy horizon, there are nevertheless a few certainties which may well put the sector on a better footing.

Second, the government, at both federal and state levels being landowners, are stepping up on affordable housing.

Third, prices are expected to be more realistic going forward.

Rehda president Datuk Seri FD Iskandar Mohamed Mansor is seeking government cooperation to reduce or waive development charges and other charges, collectively known as compliance costs, in order to bring down prices as this is “too challenging” for private developers to go it alone, considering today’s high land prices.

“If the Government wants developers to build more affordable housing, give us cheaper premiums or don’t charge at all.

“We will then see more stability in prices, or even a reduction, if development charges and all sorts of other charges imposed on developers come down,” said FD Iskandar at a Rehda first half-year review recently.

He says property development and land matters have been the biggest revenue earner for every state. Both federal and state governments own large tracts of land. Although FD Iskandar had made this call before, he was very passionate and firm this time around. Other developers, previously silent, are also quite vocal about the various land and development charges they have to fork out.

This is probably the first time developers are coming together to make a collective public call to seek a waiver or reduction of development and other aspects of compliance cost. The effectiveness of that call depends on the Government’s will to act.

While developers can clamour for such waivers, what is facing the market today is weak sales and this in turn is forcing developers to tweak pricing and strategy a bit, hence the drop in the number of launches as they try push unsold stock.

This, says Tiew, can be seen in the various agencies under the federal and state governments, among them being PR1MA Corp mandated to build 500,000 units of affordable housing units by 2018, as outlined in Budget 2013.

The demand for housing has always been there. The issue is affordability, says Kenanga’s Sarah Lim.

“Of late, developers are beginning to price units at RM500,000 and below,” she says.

The current change in direction is attributed to societal and government pressure. Unsold stock and government pressure forced developers to relook their pricing strategy.If developers keep building RM1mil homes, when the threshold is RM500,000 and less, they will be left holding unsold stock. In order to move stocks, creative marketing/financing strategies are employed to move these stocks.

“Prior to this, what was booked was considered sold. Now, this is no longer true,” Lim says.

Lim says there are two issues here, the pressure on the sector as the rate of aborted sales crept up and the people’s demand for realistic prices.

“What we are seeing today is the government’s influence. It is actually steering the market in the right direction,” she says.

The other certainty is observed in the rental market, which is expected to continue to be soft next year.

There will be “low occupancy rate” for projects completed last year (2015) and this year, with rental yield at less than 3% a year, says Andaman group’s Tiew.

It is cheaper to rent than to buy. There is so much supply going around and the purchasing power of the ringgit is shrinking.

She says if there is a 50% loan rejection rate for affordable housing, and considering the limited supply by private developers, renting may be the only option.

In October 2015, Blackstone led a deal that put Manhattan’s biggest apartment complex in the hands of the world’s largest private equity firm and maintain some affordable housing at the property.

Blackstone and Canada’s real estate company Ivanhoe Cambridge Inc acquired the 80-acre enclave for about US$5.3bil. Rent is kept below market rates for some 5,000 units. Public transport and other amenities must be part of the development for it to succeed. “Government grants and resources are needed to identify the right location to built more council homes,” she says in her paper.

In today’s low yield environment, pension funds around the world are looking at other ways to generate dividends besides equities and fixed income securities. They are buying into infrastructures and large township developments where there are economies of scale for maintenance.

Malaysia’s national housing dilemma cannot be solved by profit-oriented private developers alone. The golden property years between 2010 and 2014 have been intoxicating, having resulted in expectations of 20% to 30% rise in sales year-on-year, like the manufacturing sector. But the property sector is quite unlike manufacturing. The reflection point was seen in 2014 after the government introduced certain cooling measures and anti-speculation sales gimmick.

Going forward, the emphasis on housing priced RM500,000 and below means developers have to sell more units to make the same sales value as previous years.

“They have to sacrifice some of their margins. Higher profit margins can be had from the mid- to high-end segments,” says Lim. They will have to work harder to help buyers secure loans.

This search for some form of cohesion in the national housing arena has taken a bit of time. Hopefully, the coming Budget 2017 will pave the way for more positive action.