Hong Kong (CNN)After months of lockdown, parts of Southeast Asia are leaving behind their “zero-Covid” policy and charting a path toward living with the virus — despite experts’ warnings that it may be too early to do so.Covid-19 swept across the region this summer, fueled by the highly infectious Delta variant, with cases climbing steeply in July and peaking in most countries by August.Now, governments including Indonesia, Thailand and Vietnam are looking to revive their economies — particularly the vital tourism industry — by reopening borders and public spaces. But experts worry that low vaccination rates in much of the region, and the widespread use of lower-efficacy vaccines including China’s Sinovac, could lead to a catastrophe.Yanzhong Huang, senior fellow for global health at the US-based Council on Foreign Relations think tank, said if vaccination rates aren’t high enough with high-efficacy vaccines before restrictions are lifted, health care systems in Southeast Asia could quickly become overwhelmed.

“You’re going to see this spike of severe cases then it’s going to overwhelm the ICU … beds, ventilators, there’s going to be a shortage capacity challenge,” he said.But for much of the public and many leaders across the region, there seem to be few other options. Vaccines are in short supply, and for many Southeast Asian countries, mass vaccination is unlikely to be achieved in the coming months. All the while, as people lose work opportunities and are confined to their homes, families are going hungry.Jean Garito, a diving school operator in Thailand’s Phuket island, said small- and medium-sized businesses are desperate for borders to reopen. He wasn’t sure how much longer the country’s tourism sector could survive, he added.”If governments are not able to really compensate businesses for their loss in the short and long term, then yes — if they don’t fully reopen, we are all doomed,” Garito said.

From June through August, many Southeast Asian countries introduced strict restrictions in an attempt to control the Covid wave.Malaysia and Indonesia imposed lockdowns nationwide, while Thailand and Vietnam put in place lockdowns in high-risk regions. Under these restrictions, millions of people were told to stay at home whenever possible and prohibited from domestic travel; schools closed, public transportation was suspended, and gatherings were banned.Since then, daily new cases have dropped across the region, though they still remain high. According to data from Johns Hopkins University (JHU), the Philippines is reporting nearly 20,000 cases a day, with Thailand, Vietnam and Malaysia all recording about 15,000 cases every 24 hours. Indonesia’s infection rates have declined the most — it’s now reporting a few thousand cases a day.The peak has just barely passed, and vaccination rates are dismally low in some places — but already, some governments are beginning to reopen.Vietnam plans to reopen the resort island of Phu Quoc to foreign tourists starting next month, according to Reuters. Authorities cited economic pressure for the decision, with the tourism minister saying the pandemic had “seriously hurt” the tourism industry. So far, fewer than 7% of the population has been fully vaccinated, according to CNN’s global vaccine tracker — nowhere near the 70% to 90% cited by experts as a requirement for for herd immunity.Thailand plans to reopen its capital, Bangkok, and other major destinations to foreign tourists by October, also hoping to revive its flailing tourism industry, which accounted for more than 11% of the country’s GDP in 2019, according to Reuters. About ​​21% of the Thai population has been fully vaccinated, according to CNN’s vaccine tracker.Indonesia, which has inoculated more than 16% of its population, has also eased its restrictions, allowing public spaces to reopen and permitting factories to return to full capacity. Foreign tourists might be allowed into certain parts of the country, including the resort island Bali, by October, according to Reuters. 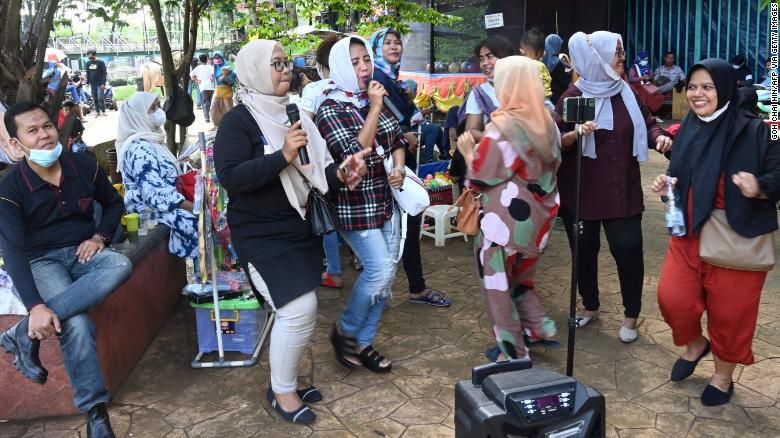 A group of residents gathering for an outdoor karaoke session at a park on the outskirts of Jakarta, Indonesia, on September 19.Malaysia, which has the one of the highest vaccination rates in the region with more than 56% of its population fully inoculated, reopened Langkawi — a cluster of 99 islands and the country’s prime holiday destination — to domestic tourists last week. Several states have also begun relaxing restrictions for vaccinated people, including dining in at restaurants and interstate travel.In some ways, the region’s rapid reopening reflects the “living with Covid” approach in Western countries like the United Kingdom and parts of the United States, where daily life has essentially resumed as normal.Among Southeast Asian countries, Singapore has “openly come out” in shifting away from the previous “zero-Covid” policy, said Abhishek Rimal, regional emergency health coordinator at the International Federation of Red Cross. And though others have not made any such formal announcements, their swift reopening suggests governments are weighing the long-term sustainability of the strategy.”There have been discussions among scientists around the world — what will be the fate of Covid moving forward?” said Rimal. “One possible scenario is that it will be an endemic disease moving forward … We are tilting toward Covid (being) part and parcel of our life.”

Dangers of reopening too soon

Experts warn however, that low vaccination rates in parts of Southeast Asia, including the Philippines, Indonesia and Thailand will make reopening much riskier than in the West.Many Western countries have vaccinated the majority of their populations — including the United Kingdom at 65% and Canada at nearly 70%.And though they are still seeing cases, with several reporting brief spikes after reopening, the number of Covid deaths and hospitalizations has stayed low in these Western countries, indicating the benefits of the vaccine.In Southeast Asia, test positivity rates also remain worryingly high. The World Health Organization recommends countries maintain a positivity rate of 5% or lower for at least two weeks before reopening — but that figure is 20% to 30% in many Southeast Asian countries, said Rimal.“That clearly indicates that the absolute numbers of what we’re seeing is not the true representation of Covid cases, because of lack of testing and contact tracing,” he added. “The recent surge of Covid-19 has taught us one thing — we cannot afford to let our guard down.”WHO has laid out other criteria — for instance, the global health body recommends governments only reopen if transmission is under control, and if their health systems are sufficiently able to detect, test, isolate and treat cases. Some of the countries reopening haven’t met these benchmarks — meaning “there’s every possibility we can see a surge of Covid,” Rimal said.But many governments in Southeast Asia may not have much of a choice. Vaccine supplies remain low in the region, exacerbated by repeated delays and a global shortage. Some countries were slow to procure doses, leaving them unprepared when the latest wave hit — and some middle-income nations — including Thailand and Malaysia — are ineligible for subsidized rates from the worldwide vaccine initiative COVAX.Waiting for global demand to ease and for supply to open up isn’t really an option, either; people’s lives and livelihoods have been severely disrupted for almost two years now, with potentially dire consequences if they’re not allowed to resume.”Millions of people are struggling to meet their daily needs,” said Rimal. “There is a huge workforce in Asia that depends on daily wages, and they are being affected because of this economic downturn.”

As the pandemic drags on, with communities lifting and reimposing lockdown every few months as families go hungry, people are also experiencing pandemic fatigue. Economic strain aside, governments also face building public pressure to reopen.It’s the “major dilemma” facing scientists, policymakers and world leaders in Asia, Rimal added. “We know vaccines are a major answer, (but) we don’t have access to the vaccine, while we see people suffering and facing job loss.”That’s why humanitarian organizations like the Red Cross are calling on global leaders to provide more vaccine doses to low-income and hard-hit countries in South and Southeast Asia, he said. But in the meantime, if countries are set on reopening anyway, there’s only one thing they can do: strengthen all other aspects of their pandemic response such as public health measures, testing and contact tracing.”Unless we do this, we will definitely see a surge in cases in the days or weeks to come,” he said.

There is another major consideration that could make the region’s transition to living with Covid more difficult: the types of vaccines on offer.Many countries in Southeast Asia have heavily relied on Chinese-made vaccines, which generally have a lower efficacy than those made by Western companies.According to Duke University, Thailand has bought more than 40 million doses of the Sinovac drug, while the Philippines and Malaysia have around 20 million each. Cambodia has bought another 16 million.Meanwhile Indonesia has bought 15 million doses of the Sinopharm vaccine, while Malaysia has got another 5 million.While experts generally agree that having access to any vaccine is better than none, the Chinese-made drugs have a lower level of efficacy than Western alternatives such as Pfizer’s or Moderna’s vaccines.Interactive: Covid-19 vaccine tracker: View vaccinations by countryBrazilian trials have shown that Sinovac has about a 50% efficacy against symptomatic Covid-19, and 100% effectiveness against severe disease, according to trial data submitted to WHO. Sinopharm has an efficacy of about 79% for symptomatic and hospitalized disease, according to WHO.In comparison, Pfizer and Moderna vaccines were more than 90% effective. China’s Foreign Ministry spokesperson Wang Wenbin previously dismissed criticism of the country’s vaccines’ efficacy as a “bias-motivated … smear.”Huang, from the Council on Foreign Relations, said attempting to reopen while fewer than half the population is vaccinated, while using less effective vaccines, could cause a flood of cases to overwhelm hospitals and even lead to a reintroduction of restrictions.Not all countries in Southeast Asia have relied on Sinovac or Sinopharm however — for example, Singapore, which has one of the highest vaccination rates in the world at more than 77% fully inoculated, predominantly uses Pfizer and Moderna.

Other countries have begun to move away from using the Sinovac vaccine among concerns over its effectiveness. In July, Malaysia said it would stop using the Chinese-made shots once its current supply of 12 million doses ran out.Thailand said in the same month it would revaccinate its health workers with the Pfizer drug once doses arrived, despite already fully vaccinating them with Sinovac.”I think if they manage to use the highly effective vaccines as booster shots and let a significant percentage of the population be vaccinated, then certainly it’s going to make reopening more justifiable,” said Huang.But for that shift to happen, the global demand on supply needs to ease, or wealthy nations with enough doses need to step in and help — which isn’t happening quickly enough.”It’s very important that the high-income countries share doses of the vaccine as soon as possible to South Asian and Southeast Asian countries so we can come out of the pandemic and go forward with normal life,” said Rimal. “This is one of the most fundamental answers we have.”For Garito, the diving school owner in Thailand, reopening cannot come soon enough. “We all have children and ourselves to feed,” he said.