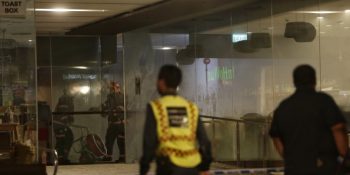 Singapore Civil Defence Force firefighters have been spotted at I12 Katong mall, where a fire broke out on Wednesday (May 17) evening.

Eyewitnesses said that at least four fire vehicles are at the scene. The mall, which is located along East Coast Road, has also been cordoned off and cannot be entered.

Photos show crowds gathering in the area outside the mall, and what appears to be smoke streaming out of the entrance near Toast Box. According to eyewitnesses, a burning smell can be detected from outside the mall.

No visible fire could be seen from the outside of the mall, only smoke, The Straits Times understands. But visibility has improved and the smoke has somewhat subsided.

Said Arnold Tangalivan, 29, a gold class manager at GV Katong: “A fireman told us there was a fire so we got our customers – about 120 – from the cinema halls out. We told them to keep their ticket stubs for a refund.”

A cleaner who wanted to be known only as Ms Jesslyn M, 36, said: “There was smoke coming out of the UOB bank at level one. And alarm bells rang throughout the building so we came out. But everyone was walking orderly, there was no panic.”

At around 11.15pm, people were seen standing outside the building waiting to get their cars out of the carpark.