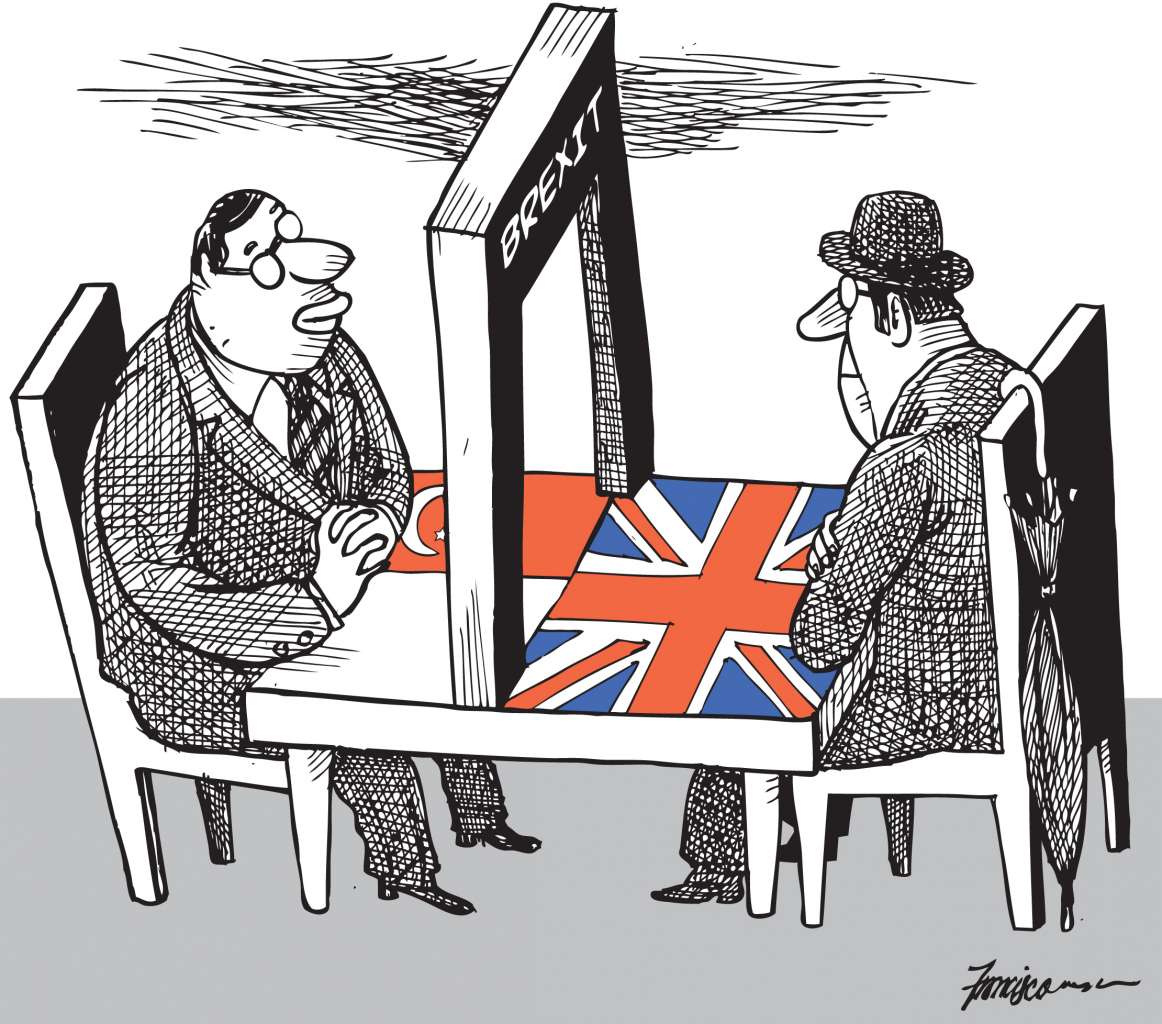 Brexit will have little immediate impact on Singapore but longer-term impact from UK companies’ scaling down, or the EU slowing down, can be expected

Britain is only No. 22 on the list of Singapore’s trading partners, which means the United Kingdom’s shock vote to leave the European Union (EU) – the world’s largest trading bloc – may have only a marginal impact in the immediate term.

Singapore could emerge from this relatively unscathed, economists say, as its non-oil domestic exports to Britain account for less than 1 per cent of total shipments, while imports from Britain constitute about 2 per cent of Singapore’s total imports.

The value of Singapore-British trade for the first five months of this year came to $4.94 billion, up from $4.69 billion in the same period last year.

Brexit isn’t bad news for everyone in Singapore. Companies like Hart Technologies, a Singapore-based dealer of fire protection equipment, will benefit from the pound’s sharp drop against the Singdollar, as its imports from the UK are now cheaper, which helps boost its profit margin.

UOB economist Francis Tan said: “Singapore firms with manufacturing operations in the UK will benefit from the depreciating pound, as this will likely lead to an increase in exports. Similarly, expanding to the UK will be cheaper in Singdollar terms because of the weakened sterling.”

But the pound’s volatility cuts both ways. In the near term, sterling’s free fall against most currencies is expected to hurt Asian exporters with strong exposure to UK markets, or with earnings denominated in pounds. But that is broadly manageable unless Brexit drags down demand across the EU as well, which would result in Asian exporters feeling a bigger squeeze, said Mr Frederic Neumann, HSBC co-head of Asian Economic Research.

Economists are also concerned that Singapore’s overall economy will be affected if British companies here start to pull back on investment in manufacturing due to the weaker pound against the Singdollar.

“In the near term, UK firms will need to evaluate their businesses overseas in light of the depreciating pound. UK companies here may scale back or hold back on investing in plants, equipment purchases or expansion in manufacturing because their labour costs, in sterling terms, are now much higher. That’s scary because our manufacturing sector isn’t doing well now,” Mr Tan said.

That in turn, could have a knock-on effect on local support services. “For instance, advertising, business and professional services, financial services may not get as much business if that happens,” he warned.

An even bigger uncertainty in the long term is whether more European countries will follow Britain and leave the EU, which is Singapore’s second-largest trading partner after China.

Polls suggest that countries such as the Netherlands, Austria, Sweden and France may hold their own referendums on membership before long, and a negative outcome could put the integrity of the EU at risk. That would be a messy affair and its impact on the global economy, including Singapore’s, will be severe, as trade, investment and labour mobility within Europe would be affected, DBS economist Irvin Seah said. That, in turn, would be detrimental to the global economy, which is already struggling with the structural slowdown in China.

This uncertainty over whether other member states will leave raises further questions about the chances of the EU-Singapore free trade agreement (FTA) bearing fruit, economists say.

The EU is also an important source of foreign direct investment for Singapore, accounting for some 31 per cent of total FDI inflows in 2014. Last year, total EU imports from Singapore reached €18.9 billion (S$28.3 billion), while the EU exported €29.7 billion worth of goods here.

While the EU-Singapore FTA was concluded in 2012, it is pending ratification. The Ministry of Trade and Industry has said Britain will need to negotiate new agreements with its trading partners, including Singapore, as it will no longer be covered by existing EU agreements.

Negotiation of a new trade deal with Britain could take some time, perhaps even a few years, Mr Tan said. In the interim, businesses may have to grapple with a lack of information, which may lead to higher operational costs.

Hart Technologies managing director Gn Chiang Yam is keeping a close watch on developments because his firm also imports products from the EU, and fears potential fallout if more members exit the bloc. But its volume of trade to the EU is not very big, so it doesn’t expect “major repercussions”, Mr Gn said.

The impact of Brexit meanwhile may be less dramatic than feared.

The vote to leave does not mean Britain leaves the 28-member bloc immediately and its trading arrangements with the rest of the bloc will likely be unchanged for two years and possibly longer.

Furthermore, Britain is not expected to immediately invoke Article 50 of the EU’s Lisbon Treaty – which gives the departing country two years to agree on terms before its membership lapses – so it gets very welcome breathing space.

As Brexit is unlikely to occur until October 2018 at the earliest, Britain is still bound by certain EU rules on tax, such as aspects of value-added tax and customs duties.

“It’s not obvious that there will be any material tax changes for Singapore companies importing from or exporting to Britain, whether before or after Brexit,” said Mr Philip Jeyaretnam, senior counsel, global vice-chair at law firm Dentons. “The most significant tax issue is likely to be the level of duties under a future UK-Singapore trade agreement. These could be the same, higher or lower than under the existing EU-Singapore agreement, or there could be no agreement for some time.”

Singapore companies that planned to invest in Britain as the gateway to Europe will have to re-evaluate the pros and cons of that choice, added Mr Jeyaretnam.

He said: “How important EU access is to business differs from industry sector to sector. Nonetheless, a number of factors favouring Britain, such as its language, its excellent legal system and its flexible labour market, will not change.”

Replacing the EU’s free trade deal with Asia will not be easy for Britain, ANZ Research warned.

“Once Britain is out of the EU, it will not enjoy similar trading privileges with Asia. Negotiating bilateral deals will not be easy. If no new FTAs with Asia are in place when Britain leaves the EU, they will be subject to prevailing World Trade Organisation tariffs,” it said.

Much will depend on the terms of Britain’s exit from the EU, said Mr Chris Humphrey, executive director of the EU-Asean Business Council.

“If Britain ends up remaining within the European single market, there might not be much change. If, however, Britain ends up completely outside of that market, Britain will have to consider priorities for negotiating its own trade agreements with its partners around the world,” he added.

While London has established itself as the financial capital of Europe with a much larger market capitalisation than the second-tier financial capitals such as Paris and Frankfurt, this could change.

Paris and Frankfurt with harmonised financial and services standards are likely to rise in prominence as Europe’s financial capitals, ANZ said.

Paris is already a major hub for London-based HSBC, Europe’s biggest bank, and Frankfurt is Europe’s second-largest financial centre. Other contenders include Amsterdam, Luxembourg and Dublin, which has a similar legal system as the UK.

Meanwhile, some economists are raising concerns over bank loans to Singapore exporters to Britain.

“If these companies are exporting less because of the strength of the Singdollar against the pound, that could hit their revenues and affect whether they can pay their loans,” UOB’s Mr Tan said.

“And if they export less, companies that typically get foreign exchange services, or treasuries services through banks, may not need as much of those services, which could in turn affect banks’ fees and revenues.”

Despite uncertainty over how things may unfold in the ongoing Brexit drama, there will likely be enough time and space for Singapore companies doing business in Britain and Europe to adjust to the new reality.

In the interim, they could consider diversifying exports to other non-EU countries as part of a longer-term strategy.

A version of this article appeared in the print edition of The Straits Times, 2016, with the headline ‘How Brexit affects S’pore’.