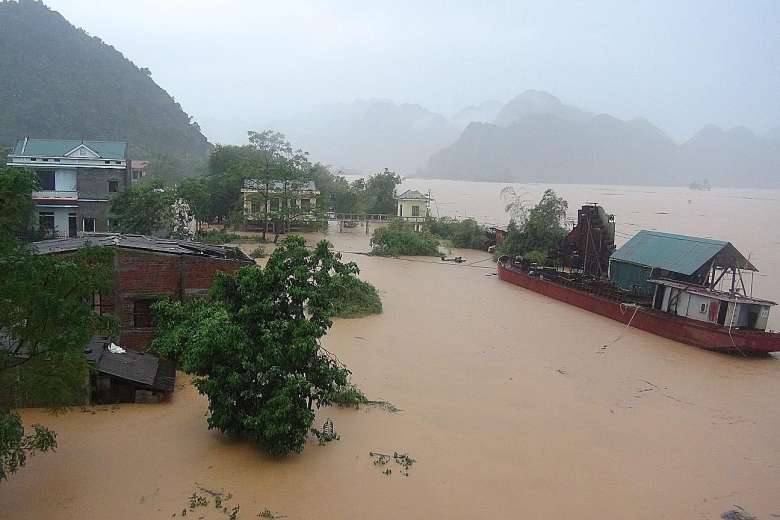 HANOI • At least 21 people have been killed by floods in Vietnam’s four central provinces in the past week, and eight are still missing, the government said yesterday amid preparations for Typhoon Sarika to hit the country.

Fifteen of the victims were in Quang Binh province, where the typhoon is expected to hit by Wednesday, the government said.

Typhoon Sarika yesterday barrelled into northern Philippine provinces before weakening. It was moving towards the South China Sea, but the local weather bureau said it was closely monitoring another storm that could cross the eastern boundary by today. “We need to focus on searching for the missing,” he told a meeting on preparations for the typhoon, according to a Vietnam Television (VTV) broadcast.

State-run VTV warned viewers that many reservoirs were nearly full and could burst at any time. It showed footage of people stranded on the roofs of their homes.

Around 500,000 people have been displaced, and more than 100,000 houses submerged and damaged by floods, according to a government report.

In the Philippines, the typhoon unleashed heavy rain and strong winds on northern rice-growing regions, but there were no confirmed casualties, said disaster officials.

Weather forecasters said Sarika was packing winds of up to 120kmh yesterday afternoon as it moved out of the country.

As many as 2,552 families, or 12,496 individuals, had been pre-emptively evacuated before the typhoon made landfall early yesterday. The authorities were forced to cancel ferry services, and as many as 160 domestic and international flights scheduled for the day.

The weather bureau has lowered storm warning signals, but said it was keeping a close watch on the next weather disturbance, Haima.

“It’s still far, out of the Philippine Area of Responsibility, but it’s now on the level of a storm. Over time, while travelling over water, it gains strength, so that’s our next concern,” said Mr Ricardo Jalad, who is executive director of the National Disaster Risk Reduction and Management Council.

He said damage from Typhoon Sarika was “not that serious” compared with what had been expected initially, but there were reports of landslides and flooding in some areas. Strong winds ripped off the roofs of some houses and uprooted trees, he said.

“We were focused on Baler, but local officials were able to conduct pre-emptive evacuation, so there was no casualty,” he said, referring to the town where the typhoon made landfall.