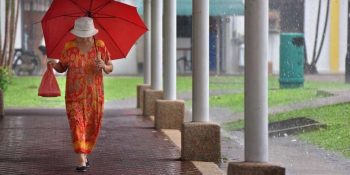 SINGAPORE – The first half of May – traditionally the second-warmest month of the year after April – is expected to be wet and warm, the Meteorological Service Singapore (MSS) said in a media advisory on Tuesday (May 2).

Daily temperatures on most days are expected to range between 25 deg C and 34 deg C, with highs up to 35 deg C expected on some days.

There will also be thundery showers in the afternoon on some days.

On two or three days, widespread thundery showers and gusty winds from Sumatra squalls are expected between the pre-dawn hours and early morning.

Rainfall is forecast to be slightly above normal for this period.

April had seen afternoon thundery showers, with the heaviest rainfall – 102mm – recorded over the Tuas area on April 21, MSS said.

The Changi climate station recorded a mean temperature of 27.8 deg C and 22 days of rain for April, which is two days more and 0.2 deg C cooler than the long-term record for April.

Most parts of Singapore received above normal rainfall in April, with the Paya Lebar area experiencing the highest rainfall with 358.4mm, 55 per cent above average, recorded.

Seletar, in contrast, had the lowest rainfall in April with 205.2mm worth of rainfall or 11 per cent below average figures.