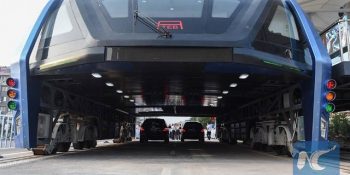 Remember that amazing straddling bus that China took out for a test drive a few weeks ago? The world couldn’t get enough of the concept and design. The savings by building on top of existing roads, rather than creating subways underneath, were incredible. The TEB-1 was the wave of the future. Turns out that the world might have seen this innovation a few times already. According to government sources in China, and analysts around the globe, the entire company appears to be a Ponzi scheme.

With all the international attention received by the Transit Elevated Bus (TEB), reporters did a lot of digging into the Jinchuang Corporation. What they found was disturbing. While the company did build a model of the TEB-1 for testing purposes, the test took place on a closed track. There was no live traffic darting in and out from underneath the public transportation giant. Additionally, investigations found the proposed system will weigh over 100 tons. Engineers working for the Chinese government stressed that the roads cannot support more than 80 tons of weight. Oh, there’s just one other small problem related to the design. The TEB-1 cannot make turns. As one Chinese government newspaper reported, ‘These flaws result from the designer (Youzhou Song) only having a primary school education.’

Up until recently, the company behind theatricality bus concept was flush with cash. Using peer-to-peer online lending sites, investors gave the company money with the promise of high returns. There’s nothing unusual about that. However, the Chinese government shut down the website funneling money to the Jinchuang Corporation because it, too, was a scam. Like any good scheme, this did not deter the company from seeking other revenue streams. As a result, they setup an online store to sell scale models of the TEB-1, gold and silver coins, and commemorative stamps. Despite all the negative publicity, and government officials acknowledging the TEB test was merely a ‘tourist attraction,’ the commemorative items are selling quickly. ThIs story provides further evidence of the truth behind the saying ‘A fool and his money are quickly parted.

One official summed up the situation in these terms: you have a better chance of catching a ride to work with the Transformer Optimus Prime than you do of riding a working straddling bus in China.