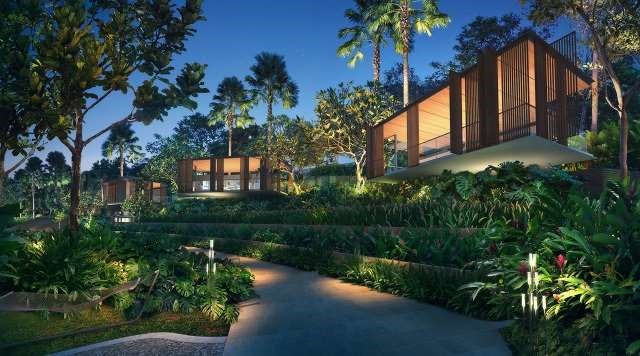 Could it be a sign that the Housing Board’s first Build-to-order (BTO) launch this year was on Valentine’s Day and that this launch is also the first time families can apply under the Fresh Start Housing Scheme? Perhaps the parallels are pushing it, but the 4,065 new flats in Clementi, Tampines and Punggol will no doubt provide a good start for couples hoping to start a family.

Out of the 4000 plus units, 1,603 will be in Clementi, 638 in Tampines and 1,815 in Punggol. This latest launch will also feature a number of 2-room flexi units which are popular with singles who are now allowed to purchase selected flats directly from HDB, and senior citizens. In fact, these were the most heavily subscribed units in the current launch.

Units in Clementi are expected to garner the most interest, with its proximity to the upcoming Jurong Lake District and schools such as NUS High School of Math and Science, UniSIM, Ngee Ann Polytechnic and the National University of Singapore. Four-room flats in Clementi are expected to start at $432,000. In comparison, prices of 4-room HDB flats in Tampines are considered affordable considering its mature estate status with four-room flats starting at $299,000 (before grants are applied).

Application closes today and analysts are expecting a four to five times take-up rate for units in Clementi and Tampines while Punggol might be twice oversubscribed. There are 731 two-room flexi units offered in Punggol and the projected subscription for these units is 5 times that number. Despite it’s isolated locale, Punggol is growing to be a busy business and lifestyle cluster, and thus more appealing to singles and senior citizens choosing to live close to their married children.

In a year-on-year comparison, new private home sales has risen a promising 17.6% since last January. With 381 units sold last month, an increase from the 324 from the same month last year and up 3.8 per cent from December’s 367 units, it’s safe to say the year for the new non-landed residential homes market segment has gotten off to a rather good start.

Suburban condominiums made the biggest showing with 238 units sold last month. 110 units were sold in the city fringes followed by 33 in the core central region. Parc Riviera came out tops with 38 units sold at $1,270 psf, followed by 25 units at The Trilinq at $1,399 psf. Developers have been aggressive in their marketing and pricing strategies, offering discounts and lowering prices to make it palatable overall to increasingly savvy buyers.

The new property launch earlier this month, Clement Canopy, together with last weekend’s launch at Grandeur Park Residences, and upcoming launches at Park Place Residences and Seaside Residences, will be a boost to the quarter’s sales volume.

While no quick nor drastic rebound is expected for the year ahead, industry experts are nevertheless hopeful about the performance of this market sector. They expect demand to hold steady and a sales figure of about 7,000 units. Essentially, the pins holding down the pricing structure are the cooling measures though there might be a bit of give should the interest rates change. Though resale HDB flat prices fell by 0.3 per cent in January and is 0.1 per cent lower in comparison with the same month last year, industry players remain confident of a stabilising market for the rest of the year.

Resale flat prices have already fallen 11.2 per cent since its peak in 2013, though prior to that, prices have already risen considerably within 3 years. Straining from the continued price decline were the 5-room and executive flats segments, in which prices rose 0.4 and 0.9 per cent respectively. And again moving in the opposite direction, while 3-room and 4-room flat prices were expected to remain mostly flat, they have fallen 0.6 and 0.5 per cent respectively.

Resale flat prices in mature estates also fell 0.7 per cent, which comes as a little of a surprise since they have always maintained their demand despite falling numbers. Could the fall be due to the government ramping up the supply of new build-to-order (BTO) flats in mature estates over the past few years? Possibly. The trickle-down effect works just as well in both private and public property sectors.

As the price gaps between private and public homes close, the pool of options for property buyers becomes bigger and while some HDB owners are holding on to their units in wait of better times, some may be forced to sell as they move on to their new BTO units or to private properties they are upgrading to. The increase in resale units may put some pressure on prices and sales volume. Already the volume of resale units have fallen 13.9 per cent from last December. Tampines and Geylang registered the highest number of resale transactions closed with above-market prices of $4000 and $5,500 respectively.

Will rental market climb back up this year?

The private rental market has made a bit of a turnaround last month, posting a 1.3 per cent rise after months of lacklustre demand and declining prices.

In the prime districts, rents have rise 0.9 per cent, while the most obvious change was in the city fringes where prices rose 1.6 per cent. In the suburbs, a 1.3 per cent price increase was recorded. Rental volume also rose by 5.8 per cent in January with 3,813 units leased. That is 0.7 per cent higher than the 3,785 units leased in January 2016.

With the year leaning on this positive note, could the private residential leasing market be climbing its way out of the gloom? While property analysts are not expecting any drastic or quick decline in prices, neither are they predicting a recovery in the near future. As more new completions from 2015 and 2016 hit the market, the increase in available leasing options will make it more a tenant’s market. What are more popular are shorter leases, and the authorities may even begin to reconsider making shorter leases legal as more tenants are leaning towards these preferences. Previously 2-year tenures were common, but of late, 1-year leases are now becoming the new norm.

For HDB flats, rents have been falling almost entirely across the board with the 5-room flat segment leading the way with a 1.5 per cent decline. 3-room flat rental prices have however risen by 0.2 per cent. Rental volume for HDB flats have also fallen 16.1 per cent last month. Grandeur Park Residences premiered its show flat to a grand crowd last weekend as they thronged the Tanah Merah site in all eagerness. It will officially open for purchase on March 4.

Most of the potential buyers were there to suss out the new 720-unit residential project situated near the Tanah Merah MRT station. Its proximity to the MRT station and location has no doubt attracted keen eyes. Most have spotted this new project for its rental and investment potential.

As more than half of the units in Grandeur Park Residences are one- and two-bedders, the more palatable quantum prices is a big draw for investors. Prices of the 2-bedroom apartments start from $700,000. Though the developers expected a big crowd at the launch of the show flat, the response has been overwhelming and is indeed a positive sign.

There has been glimmers of hope in the resale flat and rental markets just within the first month of 2017. The new condominium market has also been faring well even before the start of the year. And there will be at least 2 other major launches coming up in the months ahead, such as Seaside Residences in Siglap and Park Place Residences in Paya Lebar. Thus even though analysts are hesitant about calling it a good year for the market, consumer confidence is once again building up.