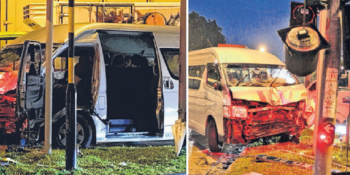 SINGAPORE – Twelve people were taken to hospital after an accident involving five vehicles in Pasir Ris on Friday (July 14) evening.

The police told The Straits Times on Saturday that they were alerted to the accident, which involved three minibuses, a van and a car, along Loyang Avenue at 5.12pm.

“Twelve casualties aged between 28 and 64 were taken conscious to Changi General Hospital,” said the police spokesman.

ST understands that the driver of one of the minibuses is believed to have had a stroke.

The hospital was on standby to receive him, which is typical of more serious medical cases.

The Singapore Civil Defence Force (SCDF) said it was alerted to the accident at the junction of Loyang Avenue and Pasir Ris Drive 3 at 5.15pm.

It dispatched a fire engine, three ambulances and two support vehicles and took 12 people to hospital.

The minibus driver had about 10 passengers in his vehicle, Lianhe Wanbao reported on Saturday.

The car driver, who gave his name only as Mr Chen, said the traffic lights were red at that time. He was slowing down at the light, when he felt his vehicle being hit on the left side.

When he turned, he saw a minibus hitting another minibus in front of it. But instead of stopping, the minibus kept driving forward and pushed the vehicle in front of it for another 50m.

It hit a kerb, reversed, and went over the divider into the opposite-facing lane, Mr Chen said.

“There was a van and another minibus there that also were hit,” he said.

People at the scene told Wanbao that the minibus driver is believed to have suffered either a stroke or heart attack and lost control of his vehicle.